2016 is (predictably) set to be the hottest year on record

By Loren Grush
on July 21, 2016 01:29 pm
If temperature trends continue, 2016 is on track to be the planet’s hottest year on record, according to NASA. The first half of the year has already seen some heat extremes: it was the warmest half-year ever recorded for the planet and each month from January to June was the warmest month ever in the modern temperature record. And that record spans back all the way to 1880.
NASA made these high temperature measurements thanks to satellite data and ground-based observation. And the space agency notes that the supreme heat seems to be sticking around despite the lessening effects of El Niño — a period of abnormally high temperatures in the Pacific Ocean that influences weather. "While the El Niño event in the tropical Pacific this winter gave a boost to global temperatures from October onwards, it is the underlying trend which is producing these record numbers," said Gavin Schmidt, the director of NASA’s Goddard Institute for Space Studies. This indicates the extreme temperatures are the result of an overall warming that has taken place over the last couple of decades, thanks to the abundance of heat-trapping gases like carbon dioxide in the atmosphere, NASA argued. 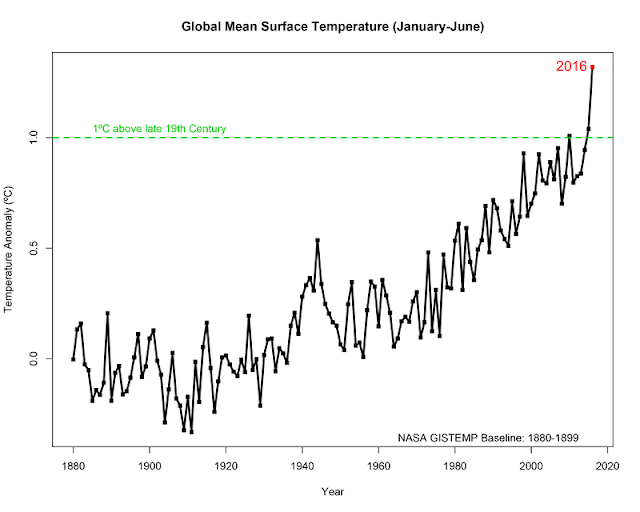 The high temperatures in the first half of 2016 have also correlated with low sea ice coverage in the Arctic. Five out of the first six months of the year set records for having the smallest monthly coverage of Arctic sea ice since satellite observations of the region began in 1979. Now, during the peak summer melt season — when the Arctic ice is melted away by the Sun — the ice coverage is about 40 percent less than it was in the late 1970s and early 1980s, according to NASA.  MORE
Posted by Melinda Pillsbury-Foster at 5:41 AM