ExxonMobil Waves a Fond Farewell to a Favorite Flunky 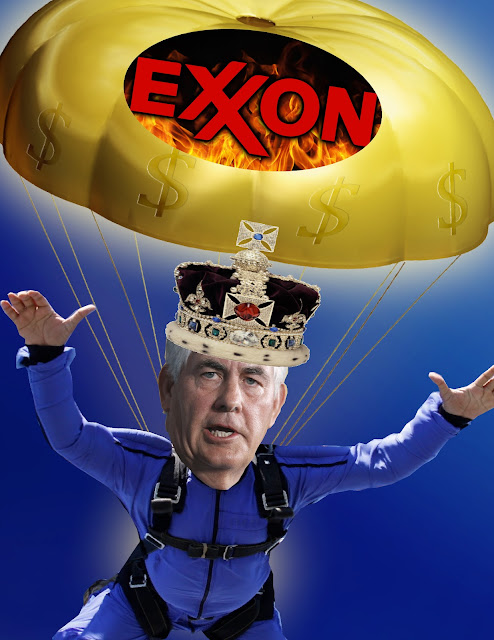 Want to start a pool on what day the Golden Moment will occur for Rex – How about the amount in the bag he will be carrying off with him when he goes?

It was 1975 when Rex was hired on at Exxon as an engineer. So maybe he was not very involved when Exxon started its now famous study on the impact of oil on the environment in 1977 – but he doubtless heard the study trumpeted and the whispers when the project was suddenly dropped.

Rex was around in 1982 when it began to dawn on them, and then sink in, that oil causes climate change. They already knew about the nasty effects of petroleum poisoning, which first announces itself as a cold or the flu, these symptoms moving on what appears to be pneumonia or bronchitis. The third stage is when the toxic materials move on to other organs to cause cancer or a myriad of other conditions, most of which will kill you.

Rex, like others in his profession had to put up with these inconvenient truths. Must have been tough on him, you know.

Rex was there in 1989 when the Exxon Valdez ran aground in Alaska. It was tough covering up the impact of petroleum poisoning on 10,000 clean up workers. He deserves some credit for that, don't you think?

Rex and his lovely wife, Renda, also deserve credit for having to make do with the piddling salary of a petroleum engineer as Rex worked his way up the hierarchy. The median salary is only $130,280.00 a year. Rex and Renda had to learn how to live on a budget.

Just like the American dream, they cut corners as Rex put in long hours reading projections on what oil would be selling for in twenty years. But it paid off.

The merger of Exxon and Mobil took place the next year, in 1999. Instead of losing ground Rex was named Executive Vice President of ExxonMobil Development Company.

Then, a momentous moment in his life, Rex became president and director of Exxon Mobil in 2004.
Sadly for Rex, he was not president of ExxonMobil in March of 2001 for the excitement of meeting covertly with then Vice President Dick Cheney. It must have been exciring to sit there divvying up the oil resources of Iraq. Of course, September 11, 2001 had not yet happened, but perhaps they had plans for that. Anyway, the oil bosses met and divided it up. I suspect Saddam Hussein was not invited.

Drum Roll.....on January 1, 2006 Rex was elected chairman and chief executive officer (CEO), following the retirement of Lee Raymond. And busy guy that he is, Tillerson is also serving as a trustee for the Center for Strategic and International Studies and the American Petroleum Institute, and was also a member of the Business Roundtable.


But all was not necessarily smooth sailing. The Rockefeller family wanted Exxon Mobil to invest more in alternative energy – but fortunately they could not get the necessary majority. The untrammelled future of oil continued and all was well – Rex managed to hold on to both job titles.
And the time had come to think about his legacy. So, in 2009, Exxon Mobil acquired XTO Energy, a major natural gas producer, for $31 billion in stock. Smart move on his part. Many think Rex will be honored and remembered for this smart move.
In 2011 Tillerson signed an international agreement with Russia to jump start drilling in the Arctic. This deal was valued at around $300 billion.
Now, don't you think it is piddling that Rex's whole compensation package was only $40.3 million in 2012?
At the time Rex was also working his fingers to the bone as a member of the Executive Committee of The Business Council, 2011 and 2012.
But then Rex had to take a stand which astonished many, joining opponents of a tiny little proposed water tower established to carry out fracking-related work near their homes. This was on February 20, 2014.
The media reported Tillerson joined Plaintiffs, included former U.S. House of Representatives Majority Leader Dick Armey and his wife. Tillerson and his wife dropped out of the lawsuit after a judge dismissed their claim in November 2014. The lawsuit claimed fracking could damage the ground water, making it toxic and cause earthquakes. Now, isn't that silly?

Nasty people said Rex and wife dropped out because of the awkward questions which were asked.g Imagine! No...Rex is used to fielding awkward questions, after all, he worked for Exxon all of his life.


So, how about that Rex Pool? Contact us if you are interested. And below notice our prediction for oil, and why. 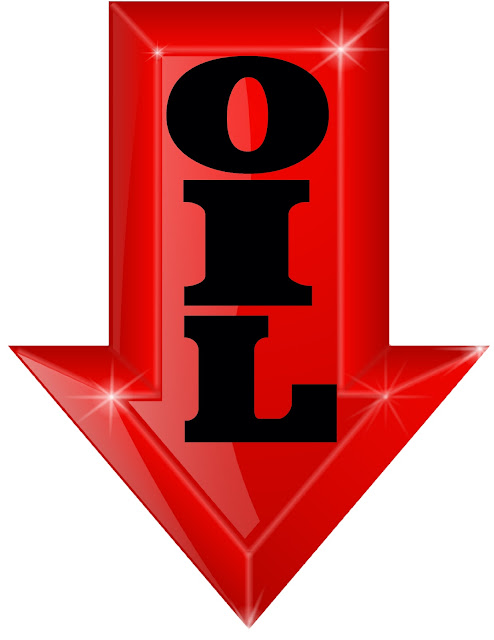 None of the predictions opined by oil or the Main Stream Media and financial rags mentions their competition, alternative energy technologies.  Not one.  But the banks and other Grid Corporations are investing in solar, big time.  Sell now.

Posted by Melinda Pillsbury-Foster at 10:02 AM