One year ago, through our former organization, DANS, we provided modeling, analysis, correlations and background on the oil industry in the immediate aftermath of the Refugio Spill.  (From DANS SHEET 1, one of multiple models supplied) 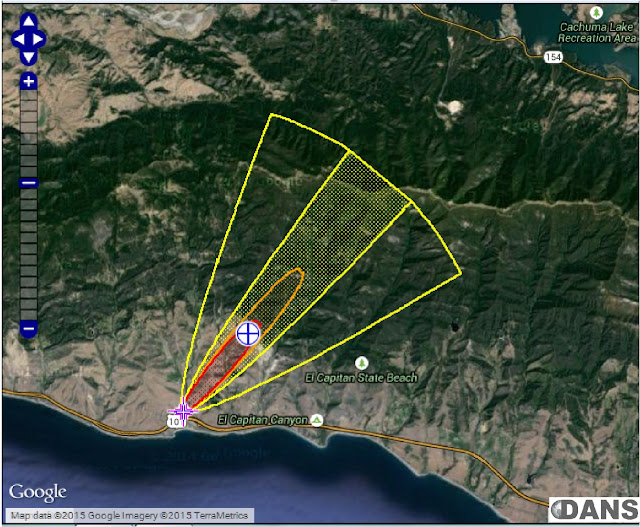 This is one of the worst oil spills in Santa Barbara history. Therefore, we, now EcoAlert, prepared this review for what we knew then and what actions we recommended. This could impact some of the indictments revealed this week and perhaps expand the criminal investigation to hold all responsible parties accountable.
Shortly after the spill we asked about the locations and timelines of the 5 Plains employees who reportedly worked out of EXXONMobil’s Las Flores Canyon Facility. We recommended that each of the workers involved provide signed affidavits as to their whereabouts and actions. We emphasized that all correspondence including emails, telephone logs and faxes by the operator in the first 24 hrs. be included in the body of evidence in case criminal action is eventually pursued. We provided an article with, time line from the available information. This went out as a news release on July 7th .

We argued that,
“Plains knew the names and whereabouts of all of their employees during the first few hours of the spill incident. We further claimed that they knew the condition of their little ten miles of pipe. They surveyed it in 2012 and again in 2015, and they made numerous repairs and external inspections. We know it does not take months to pull up these records on a 10-mile stretch of their 18,000 mile pipeline network. So, if they failed to release this information voluntarily, they should have been subpoenaed.”

We also questioned EXXONMobil’s role in creating and responding to the pressure anomalies in the Plains Line 901 pipeline located only a short distance from their temporary storage tanks at the oil treatment center. We pointed out that Plains owned only ten miles of pipeline in the Refugio area, the rest of pipeline upstream from the spill is owned by EXXONMobil, who also controlled the offshore platforms where the oil originated.
Secondly, we criticized the function of the Unified Command in providing explanations and public relations for Plains actions which might have been criminal. We pointed this out at the time. This has been borne out by the 46 count indictment against Plains and their Environmental and Regulatory Compliance officer.
One year ago we recommended alternatives to the way spills and other similar disasters be handled. We were right and strongly suggest our proposal be adopted.
Furthermore, we expressed concern for the health of clean-up workers and recommended a list of names and contacts for everyone who was involved with clean-up or remediation be obtained.
Nothing has been done about this. At the time, we sent information on the symptoms of petroleum poisoning to the Santa Barbara County Medical Society, asking they distribute the information, by email, to their members. The information supplied was based on the BP Gulf Spill and supplied by Science Corp. It was prepared by Michael R. Harbut, MD ,Professor, Clinical Medicine Director, Environmental Cancer Initiative, Chief, Center for Occupational & Environmental Medicine. Petroleum poisoning follows patterns. We wanted local physicians to know what to look for.
Finally, we recommended 21st century technologies (like drones and modeling) to monitor and track the initial stages of the spill dispersal. We had supplied some of these for the first hours after the Refugio Spill.
Few of these recommendations have been implemented so far, but it is not yet too late. The Attorney General can still subpoena all communications between Plains and EXXONMobil in the region within 24 hours of the spill in the region. The Unified Command can be pressured to release all of its monitoring and modeling data of the spill and its associated air and water pollution dispersal. The health department still needs to collect medical histories on all cleanup workers who are potential victims.
Ultimately, the entire spill response bureaucracy needs to be updated with the latest technologies and modernized with geospatial real-time assessment and decision making. Grounds existed for criminal indictments immediately after the spill. Essential upgrades and improvements for all of their facilities, including refineries, are long over due, as we have witnessed in California and across our country. (Graph from our article) 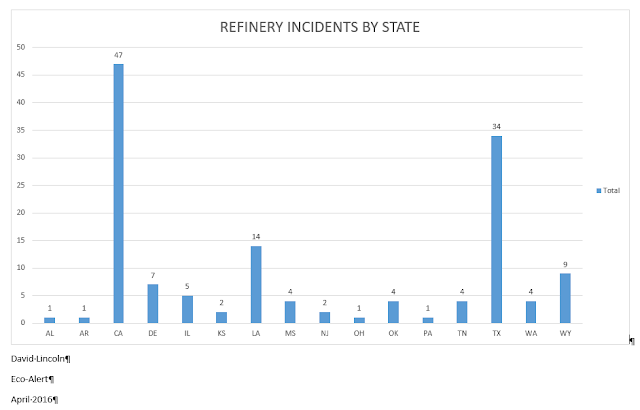 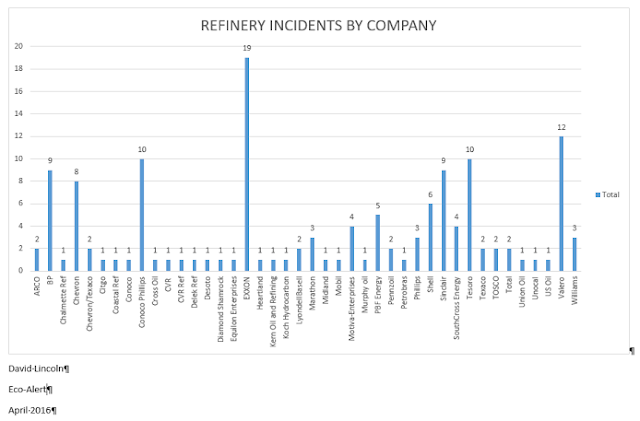 We emphasize, ExxonMobil should also be charged.
The best way to protect innocent people and minimize the environmental impacts on the ecosystem is to ensure those who ignore the obligation to carry out maintenance and deliberately but people and the environment at risk are held accountable to the full extend of the law, paying reparations which make the victims whole.