Three journalists who helped break the "Panama Papers" secret asset scandal last month described May 12 at the National Press Club their year-long secret investigation of hidden assets, as well as their  innovative methods and future implications. 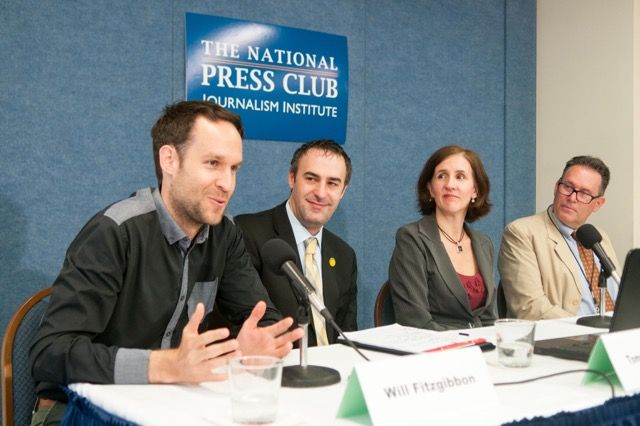 In the largest leak probe in journalism history, some 376 investigative journalists from 80 countries worked collaboratively to report stories beginning April 3 on 11.5 million financial records from the Panama-based law firm Mossack Fonseca. The firm is one of the world's top creators of shell companies that hide the assets of the wealthy. The probe has prompted official resignations and ongoing investigations in several nations.
Also, the probe coordinated by International Consortium of Investigative Journalists (ICIJ) has created hope that a new model can augment the traditional investigative reporting, which is so expensive and otherwise difficult that many if not most news organizations have abandoned ambitious projects.
"Collaboration is the way to go," said ICIJ deputy director Marina Walker Guevara, "not the 'lone wolf' model." She is shown with her ICIJ colleagues Will Fitzgibbon (at left) and Kevin Hall (at far right), the chief economics correspondent for McClatchy chain of newspapers. Panel moderator Thomas Burr, press club president and Washington correspondent for the Salt Lake Tribune, is at center in the photo republished courtesy of photographer Noel St. John.
"The Panama Papers," she said, "show an array of behavior far beyond tax evasion," and include traffic in drugs, arms, and people (for sex).
Burr opened the discussion by noting that one of ICIJ's first meetings on its scoop occurred in secret nearly a year previous at the club in the room right behind where the panel was sitting. "Honestly," he said,"we at the club had no idea what they were talking about. Until now. That was one of the first meetings of the consortium of journalists who are investigating what we now call 'the Panama Papers.'" 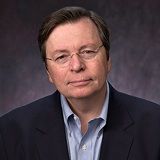 ICIJ, founded in 1997 by the American University journalism professor, best-selling author and former ABC and CBS News producer Charles Lewis (shown in a file photo), began breaking its story April 3 on its site with a story headlined, Giant leak of offshore financial records exposes global array of crime and corruption.
Partner news organizations around the world published or broadcast their own versions under a plan whereby ICIJ controlled the timing, but participating outlets controlled the subject and approach.

ICIJ's story began:
A massive leak of documents exposes the offshore holdings of 12 current and former world leaders and reveals how associates of Russian President Vladimir Putin secretly shuffled as much as $2 billion through banks and shadow companies. The leak also provides details of the hidden financial dealings of 128 more politicians and public officials around the world.
The cache of 11.5 million records shows how a global industry of law firms and big banks sells financial secrecy to politicians, fraudsters and drug traffickers as well as billionaires, celebrities and sports stars.
These are among the findings of a yearlong investigation by the International Consortium of Investigative Journalists, German newspaper Süddeutsche Zeitung and more than 100 other news organizations.

How the Scoop Started

An individual known as "John Doe" approached the German newspaper Süddeutsche Zeitung (SZ) with an offer to leak the documents. The source remains anonymous even to journalists on the investigation. "My life is in danger," he wrote them.

"Pay attention to whistleblowers," said the ICIJ's Walker Guevara in describing lessons learned from the project. She praised the newspaper SZ for following that procedure even though newsrooms are increasingly busy during an era of decreased income. She praised the organization also for realizing that the data and story possibilities were too massive for one news organization.
Even ICIJ, with 12 staffers and a base in Washington, DC, was far too small to handle the workload. Therefore it went beyond its usual 190 partners to organize approximately twice that many for this project.
Hall, shown in another photo by Noel St. John, said his employer McClatchy has detailed him for a year on the project virtually full time. He said two of his McClatchy colleagues have been working on it full-time for a half-year even though the company has been undergoing significant cost-cutting and management changes, like most mainstream news organizations.
ICIJ's website describes how it has been organized to overcome such financial difficulties:
ICIJ was launched as a project of the Center for Public Integrity to extend the Center’s style of watchdog journalism, focusing on issues that do not stop at national frontiers: cross-border crime, corruption, and the accountability of power. Backed by the Center and its computer-assisted reporting specialists, public records experts, fact-checkers and lawyers, ICIJ reporters and editors provide real-time resources and state-of-the-art tools and techniques to journalists around the world....
The need for such an organization has never been greater. Globalization and development have placed extraordinary pressures on human societies, posing unprecedented threats from polluting industries, transnational crime networks, rogue states, and the actions of powerful figures in business and government.
The news media, hobbled by short attention spans and lack of resources, are even less of a match for those who would harm the public interest. Broadcast networks and major newspapers have closed foreign bureaus, cut travel budgets, and disbanded investigative teams. We are losing our eyes and ears around the world precisely when we need them most.
Our aim is to bring journalists from different countries together in teams - eliminating rivalry and promoting collaboration. Together, we aim to be the world’s best cross-border investigative team.
What we do

The leaked data covered nearly 40 years, from 1977 through the end of 2015. It permits an unprecedented view of the world of offshore finances. Panelists said some journalists have faced litigation threats but none have been sued so far. Also, they said that Panama's government strongly discourages use of the name "Panama Papers" for the scandal and instead prefers that it reference only the law firm Mossack an Fonseca. ICIJ note that sanctions against the media are different around the world, thus providing another reason to empower local news outlets to publish information according to their best judgment regarding the facts and also their audience temperment.
Although some critics might speculate that the concept of "collaborative" journalism might create gatekeepers with too much control over sensitive topics, ICIJ's deputy director emphasized that local partners can emphasize what they think important, with the benefit of both local knowledge of the players and expected audience reaction.
The panelists stressed also that the many stories already published around the world about the financial disclosures are just the beginning.
"This is the gift," Hall said, "that's going to keep on giving for a long time."

Posted by Melinda Pillsbury-Foster at 11:05 AM