By BRIAN MELLEY / The Associated Press 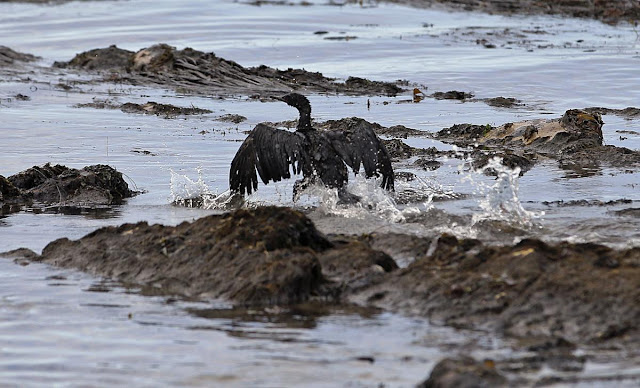 In this May 21, 2015, file photo, an oil-covered bird flaps its wings amid at Refugio State Beach, north of Goleta, Calif. Plains All American Pipeline said in a statement Tuesday that a California grand jury has indicted the company and one of its employees in connection with the pipeline break.

LOS ANGELES – A Texas pipeline company responsible for spilling more than 140,000 gallons of crude oil on the California coast last year was indicted on dozens of criminal charges in the disaster that closed popular beaches and killed sea lions and birds, prosecutors said Tuesday.

Plains All American Pipeline and one of its employees face 46 counts of state law violations in the May 19, 2015, spill that initially went undetected until oil began pouring onto a pristine beach on the Santa Barbara coastline and running into the ocean.

Initial investigations by federal regulators found the 2-foot-wide underground pipeline was severely corroded where it broke on land. MORE

Posted by Melinda Pillsbury-Foster at 5:05 PM