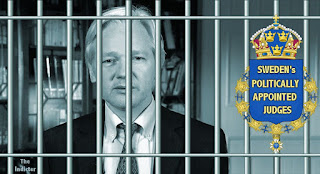 British authorities threatened WikiLeaks founder Julian Assange with arrest on a bond-jumping charge last week after their Swedish counterparts gave up trying to investigate Assange on what appears to have been a dubious series of sex claims that have been pending against him for nearly seven years since his 2010 speaking trip to Stockholm.
The British effort, if pursued aggressively with threatened punishment beyond the norm, would further compound a travesty of justice that has already disgraced the Swedish and British legal systems.


The Swedes have wasted vast amounts of taxpayer money for the probe, as have the British in the latter's around-the-clock surveillance of Assange for years cost millions of pounds. The evidence suggest that both nations have undertaken such extraordinary actions to thwart WikiLeaks and not to investigate claims arising out of consensual sex with two Swedish women who invited Assange to sleep with them separately before complaints arose.   MORE

Posted by Melinda Pillsbury-Foster at 2:14 PM