Exxon's Oil, Plain's Pipe – The Tyrannosaurus in the Room or - On the Beach with Rex and Greg

Let's start at the beginning.  The oil which poured out of the pipe originated from the Hondo Drilling Platform, owned by ExxonMobil.  It was transported via ExxonMobil pipes to Las Flores, an ExxonMobil Facility, and then began its transport by Plains All American Pipeline through the Plains connection to the ExxonMobil Tank. 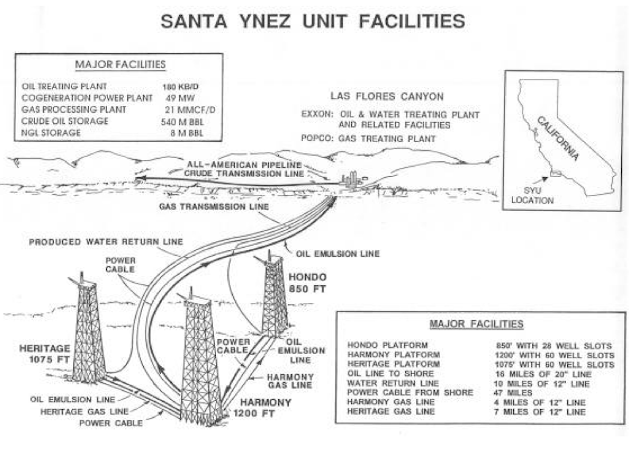 Five Plains employees are at work in a room at ExxonMobil's Las Flores Pump Station where their company's ten miles of pipeline begins a few feet from one of two massive tanks.

A mechanical issue is reported.  The pipeline, carrying Exxon crude from Hondo, shuts down at Sisquoc Pumping Station due to unknown reasons.  At 10:47AM, approximately, Las Flores shuts down, reporting a pressure surge.

Exxon owns the three drilling platforms, Hondo, Heritage and Harmony, located in the Santa Barbara Channel.  Exxon owns the pipeline which feeds into the Las Flores  Canyon Processing Facility along with the room provided to the five Plains employees who oversee the exit of Pipe 901 from Las Flores.  The Refugio Spill will take place three miles into the 901.

The ten miles of pipe owned by Plains on this route, known as Pipeline 901,  had been cited by the U.S. Department of Transportation (DOT)  as needing immediate repair in the Corrective Action Order issued by the Pipeline and Hazardous Materials Safety Administration (PHMSA), dated June 3, 2015.  Plains had been aware of the problems since the test was done a month earlier, two weeks before the spill took place on May 19th.

The May 5th In-Line Inspection (ILI) revealed four areas requiring, “ immediate investigation and remediation” on Pipe 901.  Loss of original metal was reported as “54 and 74% of the original pipe wall thickness.”

Because of the corrosive nature of crude, high temperatures used for transport and weathering pipes need constant monitoring.

The Hondo Crude flowing through Pipe 901 on May 19th was heated to 126 degrees so it could be transported.  The profile for the Hondo Crude includes Sulphur 4.3 % by volume (sour oil) .

When heated, the Sulfur will be ready, if exposed to oxygen, to react, becoming Hydrogen Sulfide, a highly poisonous gas.  The Hondo Crude also contains Benzene, which also becomes gaseous when released to the air.  Both, being heavier than air, could have, absent a breeze, flowed down to the beach.

The five Plains employees controlled a valve in a small building, like a maintenance shed, a few feet inside the Exxon Facility.

Pipeline 901 crosses the manifold carrying the oil, owned by ExxonMobil.

150 feet from the tank is a manifold where pipes  come together.  This is exposed.  A spur crosses the main pipeline.  The pipelines, perpendicular to the main line,  lead to  a small building about six car lengths long and 2 car lengths wide where it stops.

This is where the valve is believed to be located.   It is also the place where the Smart Pig, used to test Pipe 901 on May 5th was inserted, traveling all the way to Refugio and beyond.  The Smart Pig reported to Plains' contractors, who let Plains know, there were problems with 901, providing them with the data.

Plains had not been ordered by Jeffrey D. Wiese, Associate Administrator for Pipeline Safety, Pipeline and Hazardous Materials Safety Administration, to stop pumping  so they continued to do so.  It was a judgment call.

Sisquoc Pump Station shuts down both the backup and main pumps.

The Refugio Spill has not yet taken place.

The pumps at Las Flores shut down due to a high pressure reading.  An operator restarts the pumps at the Sisquoc Pump Station, which is about 50 miles north of the spill site.

How much pressure is too much when the pipe is already having issues?  This is a judgment call.
Pressure gauges are old technology and subject to multiple misreadings.  Many oil companies now use Ultrasound monitoring, which provides precise bi-directional and highly dynamic flow measurement and the non-intrusive clamp-on technology to ascertain flow rates, a better indicator.
Plains is still on old technology in other ways as well.  No automatic shut off valve is on the system although Santa Barbara County requires this.

The Sisquoc back-up pump goes down, followed by the main pump, according to the company. It is not possible to restart the pumping.  At Las Flores pumping continues.

Due to “pressure anomalies” occur that morning, a Plains operator at the Midland Control Center in Texas remotely shuts down the ruptured pipe and finally stopping the pump at Las Flores.

A 9-1-1 call reporting strong oily odors comes in to the Fire Department Dispatch Center for Gaviota. In response, a crew from County Fire Station 18 goes out on the bluffs to investigate the strong odor and follows it down to the beach at Refugio where 901 is bleeding oil through the culvert, onto the beach and into the Pacific Ocean.
The potentially fatal concentration of Hydrogen Sulfide and Benzene, dispersed to the area north and east, will have dissipated from its maximum ten minute high by the time emergency personnel arrive.
It could have been worse.

Exxon and Plains appear, by reports, to follow the same protocols for monitoring flow in the pipelines in Santa Barbara County, this being a pressure reading.  No mention is made of ultrasound technology.

What did Exxon know about the problems with 901 and when did they know it?

Why is Exxon not also under investigation?  Why have litigants failed to name the corporation in their law suits, as is usual in similar circumstances?

Why wasn't ExxonMobil asked to answer questions at the June 26th Hearing in Santa Barbara?

Does Exxon have any data which is relevant to the ongoing investigation?

Now, how about some answers!

Plains All American Pipeline - Environmental Record
Our thanks to Channel Keepers

ExxonMobil - Environmental Record
Our thanks to the great people who provided the original research.

Melinda Pillsbury-Foster is now the Executive Producer for  Content, Freedom TV Networks, formerly CEO of DANS News Service, and a life long advocate for the environment and social justice.  Technical background on issues of petroleum using the expertise of AvertAlert  Director for Research, David Lincoln, a whistleblower on the oil companies and qualified expert witness on their practices and technologies.

Posted by Melinda Pillsbury-Foster at 11:21 AM