The materials focus heavily on remaining questions about responsibility and motive for Kennedy's shooting at the Ambassador Hotel in Los Angeles shortly after his victory in the California Democratic primary appeared to pave the way for his presidential nomination. Shown below is his victory speech shortly before he was gunned down while leaving via a kitchen pantry to avoid crowds.
Included also in this guide is research that explores the assassination's current implications for the U.S. justice system and other governance.
The materials contain varied perspectives in a style common to other topics in our series, which includes guides to the the assassinations of President Kennedy in 1963 and the Rev. Martin Luther King, Jr. on April 4, 1968.
Readers of each can find abundant evidence of covert official involvement, including in the crimes and cover-up. But we provide also books and other evidence supporting 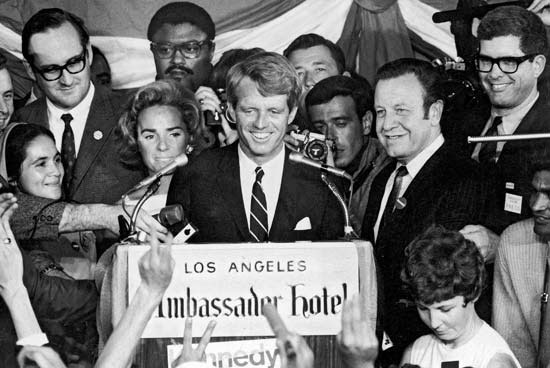 the official verdicts. In the case of RFK's murder, a jury found in 1969 that Sirhan Sirhan acted alone to kill Kennedy and wound five others with shots fired in the hotel's pantry.
Thus, our operative principle in this project is to raise informed questions aggressively but also to provide sufficient evidence for readers to reach your own conclusions.
The continued public suspicions about the deaths of JFK, MLK and RFK (as the victims were known) have been fostered by the highly irregular legal procedures involving each death, including suppression of relevant documents and fear among witnesses and investigators.
One illustration of the continuing controversy was the dramatic but unsuccessful plea this year by Kennedy's friend Paul Schrade to California's parole board to

free Sirhan on the grounds of innocence in killing Kennedy.
Schrade, now 91, said he was undoubtedly shot by Sirhan in the forehead at the hotel. But, Shrade maintained, Sirhan could not possibly have shot Kennedy because the New York senator was killed from a point-blank shot from behind, according to medical evidence, whereas Sirhan was always several feet in the front of the senator. Sirhan's defenders say he was a patsy and victim of mind-control being unjustly held to enable the real killer to escape. Sirhan is shown in a mug shot soon after his arrest. He says he cannot remember relevant details. 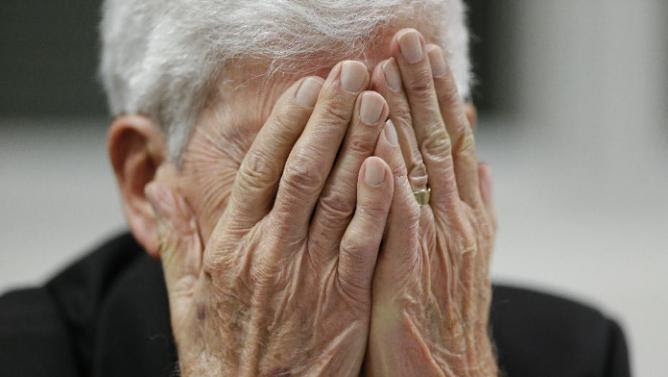 Schrade's reaction is shown during the February parole hearing, as illustrated by an Associated Press pool photograph of the proceedings, which have been marked for decades by unusual secrecy and arbitrary decision-making.
For such reasons, the new Citizens Against Political Assassinations (CAPA) has been created as a non-partisan citizen group advocating release of sealed records pertaining to major suspected political assassinations.
This editor is one of CAPA's founding directors. Information from these Readers Guides is expected to be summarized on CAPA's site, subject to CAPA's review procedures from its board of scientific, historical, and legal experts and reader feedback.
Another development the continued publication of new revelations, reflections and scholarship. Los Angeles reporter Fernando Faura will publishThe Polka Dot File regarding his investigation immediately after the shooting of the mysterious woman in the polka dot dress who supposedly yelled "We shot him" and then disappeared.

Faura said murder investigations completely disregarded his evidence when he presented it after the shooting, which he and others claim exemplified a pattern of stifling other leads to RFK's murder.
Among other recent and planned books (described below) are those of a more historical nature that illustrate the continuing importance of the RFK death, particularly after the JFK and MLK murders had wiped out the other two major progressive leaders of their era.
The goal here is to create a continually updated Readers Guide that provides perspective both on the 2016 elections and on other civic issues as the 50th anniversary of the RFK and MLK killings approaches in 2018.
Especially disturbing for this 2016 election season is the widespread notion promoted by the mass media that all three of the 1960s murders are long-settled issues that concern only wacko "conspiracy theorists" or history "buffs." Even minimal research would illustrate many major security, legal, and propaganda issues that are highly relevant to current affairs and decision-making by the next group of elected and appointed officials taking charge on the world stage.

Murder of political leaders is a common problem, according to noted historian and human rights attorney William Pepper, who believes that a continuing cover-up ruins the legacy of his friends Martin Luther King, Jr. and Robert F. Kennedy.

"Assassinations didn't start in the 1960s," says Pepper, author of explosive investigations that include a new book due June 21 exposing King's murderers. "They have been part of our society for a very long time."
Even more remarkable than Pepper's listing of political victims from Socrates, Jesus and Julius Caesar to modern times, he has provided legal representation for both of his friends’ accused killers.
Pepper believes the late James Earl Ray, King's convicted killer, and RFK's still-imprisoned convicted slayer Sirhan Sirhan have been patsies framed to take the blame for the real killers. 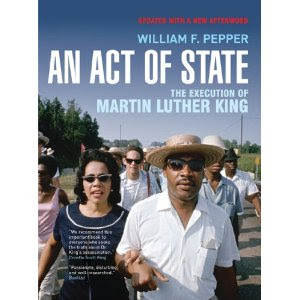 Pepper (shown in a 1967 photo with King) has spent decades attempting to expunge the convicted men's guilt in their separate cases.
Pepper's work has included his courageous and creative successes in persuading several of those allegedly complicit in King’s murder to confess at least part of their guilt. Overcoming obstacles by so-called law enforcement, Pepper has revealed a chilling plot perpetrated by rogue officials and the Mafia, most notably in his 2003 book An Act of State.
With his explosive new book The Plot To Kill King scheduled for release this month, Pepper shared his insights May 21 in a panel discussion on American assassinations and Deep State intrigue held at the annual Left Forum at John Jay Criminal Justice College in Manhattan.
Joining the panel were best-selling author Russ Baker, speaking on President John F. Kennedy’s death, and this editor.
Baker is working on a new book on the JFK murder-cover-up.
I previewed the Justice Integrity Project's “Readers Guide to the RFK Assassination” that is being released today in preparation for the 48th anniversary of the late New York senator Robert Kennedy's 1968 death early in the morning of June 5, 1968, shortly after he won that year's California Democratic presidential primary.

No Lies Radio, a non-profit grassroots affiliate of the Pacifica Radio Network, documented our 110-minute panel (including Q&A moderated by Gregory Longo). This was part of six-panel series at the conference on "The Deep State." University of California historian and former diplomat Peter Dale Scott advanced the Deep State concept with his pioneering 1993 book Deep Politics and the Death of JFK. No Lies Radio recorded all six of the panels, which are listed below.
Scott's compelling thesis and evidence, since endorsed by many others, are that the major 1960s assassinations represented a power grab by a hidden "Deep" government. The perpetrators' ability to suppress the truth of the JFK, MLK and RFK murders showed that rogue officials could eliminate the decade's three most important progressive leaders without accountability in courts or elsewhere.
Speaking on panel also were best-selling author Russ Baker and this editor. Baker described the continuing importance of President John F. Kennedy’s death. I focused on RFK and previewed the Justice Integrity Project's “Readers Guide to the RFK Assassination” being released today in preparation for the 48th anniversary of the death of the likely 1968 Democratic presidential nominee.
Posted by Melinda Pillsbury-Foster at 1:43 AM