Current bomb train burning in Mosier OR - Via Eco-Emergency Alert

By KATU.com Staff and The Associated Press Friday, June 3rd 2016
MOSIER, Ore. -- A Union Pacific train towing oil cars derailed and caught fire in the Columbia River Gorge Friday, evacuating schools in the nearby town of Mosier and closing down Interstate 84 between Hood River and The Dalles.

According to Union Pacific spokesman Aaron Hunt, 11 cars in the 96-car train derailed around noon near Mosier, about 70 miles east of Portland.

The train was hauling oil from Eastport, Idaho, and was headed for Tacoma, Washington. It was carrying Bakken crude oil, a type of oil known to be highly volatile.  MORE 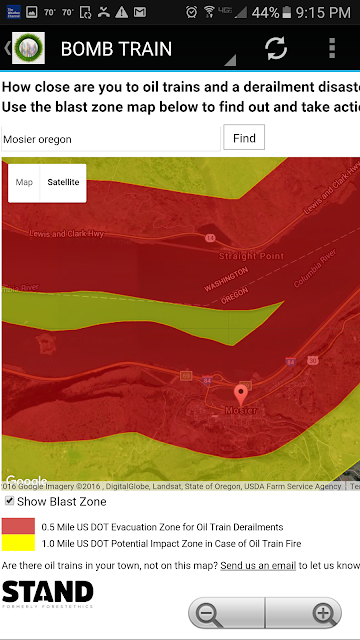 This is directly from Eco-Emergency Alert app. The half mile evacuated zone is what the fire Dept used and the arrow showing Mosier just happens to be the location of the 12 derailed Bakken oil cars. It even shows the locations of the schools evacuated. The town complained in person to Obama last month when union pacific started moving oil trains thru town . Obama said he would look into it.

Some politician should actually try to help these people and save the Columbia River.
Posted by Melinda Pillsbury-Foster at 7:59 PM