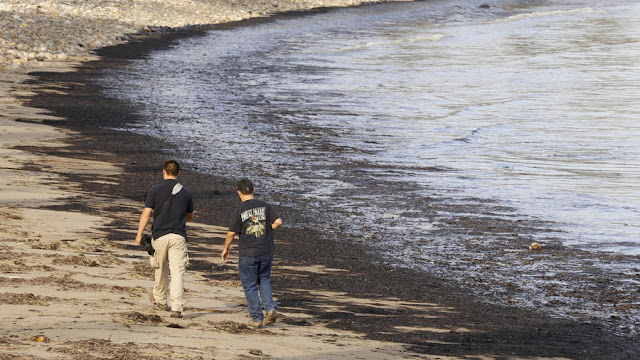 Federal pipeline safety regulators Friday issued a series of warnings to the Texas owners of an oil pipeline that ruptured and spilled as many as 143,000 gallons of crude along the Santa Barbara Coast in May.

Federal inspectors found two "probable" violations of federal safety regulations during inspections of Lines 901 and 903, which together connect offshore platforms off the Santa Barbara Coast to Bakersfield, in 2013 and 2014.

Among the inspectors' more serious findings, Plains All American Pipeline failed to keep adequate records of safety evaluations performed on the pipeline system. Though the findings are separate from the investigation into the May 19 oil spill, they point to lax safety oversight on the part of Plains.  MORE
Posted by Melinda Pillsbury-Foster at 10:13 PM