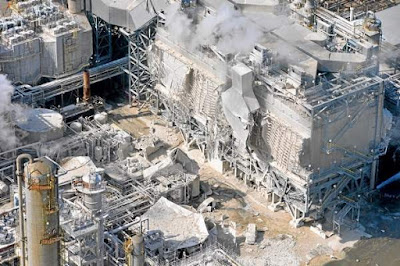 On February 18, 2015, an explosion in the Electrostatic Precipitator (ESP) unit at the Torrance ExxonMobil Refinery shook the community and registered 1.7 on the Richter scale. The explosion blasted off a chunk of the ESP the size of a fully loaded semi-truck & trailer  (80,000 lb.). Falling from 12 stories up, it accelerated to 60 mph before crashing three feet from the acid settler tank containing  50,000 lb. of volatile and toxic modified hydrofluoric acid (MHF).  At a January 2016 hearing, the federal Chemical Safety Board (CSB) investigated and declared this a “near miss” on a catastrophic MHF release.  This information had not been made public by the refinery or the City of Torrance in its report on the explosion; it first came to light from a CBS Evening News expose in September 2015.  According to the United Steel Workers International, “No industrial process risks more lives from a single accident than does… alkylation using HF,” because HF (and MHF) form a ground-hugging dense vapor HF cloud upon release.

“We were really, really lucky… [This was] a near miss [on MHF]… It could have been much more catastrophic… If I were in the community I absolutely would be concerned.”
– US Chemical Safety Board Chairperson Vannessa Allen Sutherland

ExxonMobil has denied CSB’s requests for information on the alkylation unit, where MHF is
used.  This is what they have to hide:  MHF was put in place by the 1990 Torrance-Mobil
Consent Decree to “significantly reduce” the danger from hydrofluoric acid (HF).  But MHF
is actually 90% HF and almost exactly as deadly. The safety claims made for MHF are bogus,
and the public has been fooled.

According to Vanessa Sutherland, the chairperson of the CSB, hydrofluoric acid (HF) is “one of the most hazardous and deadly chemicals.” With even minimal exposure, HF causes painful, slow-healing chemical burns and damages internal organs and bones. “In worst-case scenarios, at deadly levels, it causes asphyxiation because once inhaled it causes respiratory problems that build up fluid and you ultimately drown,” Sutherland said in an interview with CBS News.  Fluoride ions from HF can penetrate intact skin, enter the bloodstream, and bond with calcium, making it unavailable to the body. This can cause death or permanent organ damage.  Symptoms can be delayed.  For this reason, immediate medical attention is required for even modest exposure.  MORE
Posted by Melinda Pillsbury-Foster at 9:44 PM