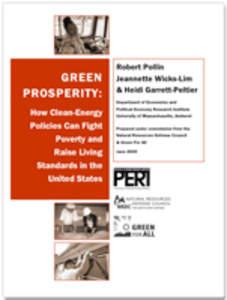 June, 2009
This report, titled"Green Prosperity: How Clean-Energy Policies Can Fight Poverty and Raise Living Standards in the United States," was developed Green for All, the Natural Resources Defense Council and the University of Massachusetts' Political Economy Research Institute. The report explores how investments in energy efficiency, clean technology and public transportation can raise the standard of living for everyone in the United States.

From the executive summary:

The United States today faces a formidable generation-long challenge: to transform the economy from being driven primarily by fossil fuel sources of energy, which are the major cause of global climate change, to becoming an economy that can function effectively through renewable energy sources and by achieving high levels of energy efficiency.

The project of building a clean-energy economy will become a powerful engine of expanding employment opportunities throughout the U.S. economy. According to a study that PERI recently completed with the Center for American Progress (CAP),1 clean-energy investments at the level of about $150 billion per year -- i.e. around one percent of U.S. GDP -- can generate about 1.7 million net new jobs throughout the U.S. economy.

This level of annual new clean-energy investments in the U.S. will be strongly encouraged through the combination of direct government spending, along with the subsidies and incentives for private business investors that would result from the American Recovery and Reinvestment Act (the February 2009 Obama stimulus program) and the American Clean Energy and Security Act (ACESA -- the Waxman-Markey bill) now being debated in Congress. Within this strongly supportive policy framework, the advance of clean-energy technologies will accelerate and markets supporting these technologies will mature. This will create a selfreinforcing dynamic of rising private-sector cleanenergy investment opportunities, which in turn will mean expanding job opportunities.  MORE
Posted by Melinda Pillsbury-Foster at 7:54 AM